50 years ago last night, I was six years old and had just finished first grade. Even though it was summer, I usually was in bed by 9 PM. (Ask your parents why!) But on July 20, 1969, I got to stay up late and go to my best friend’s house across the street. That would have been a special treat any day, but this was even more exciting. His family had a color TV (ours was black-and-white), and it was the night of the very first moon landing by the crew of Apollo 11.

It is impossible to overstate just how big of a deal the moon landing was. The astronauts were by far the biggest celebrities in the world; every kid was drawing rockets in the margins of their school notebooks; and we all wanted to be astronauts when we grew up. The endless possibilities of space travel grabbed the imagination of the country and of the whole world in a really positive way. I’m not sure there has been anything like it since. 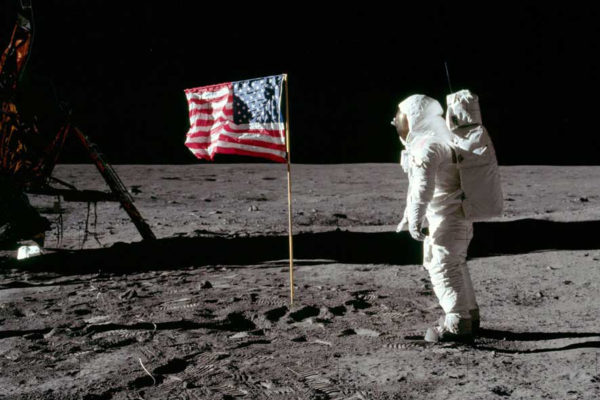 Fifty years later there are still some lessons that we can learn from Apollo. The obvious lesson is that you can do a lot of you work hard — the life stories of the astronauts are great examples. Another  lesson is that there are things that are worth doing just to see if we can do it — “… because they are hard”, as President Kennedy said when he first announced the Apollo program. To me though the most important lesson is the fact that there were 400,000 – yes, four hundred thousand — people involved in the Apollo program, just to get two men on the moon  and a third orbiting it. Every one of those 400,000 was needed. Without them Neil Armstrong, Buzz Aldrin and Michael Collins could not have sone what they did.

Whenever you have a great accomplishment, remember that you had a team of others quietly helping you get there — your patrol perhaps, or your troop, or a friend or neighbor, a teacher, your parents or brother or sister, or your country or state or community. They are worth remembering and thanking. And on the other side, remember that even if you aren’t the ‘astronaut’ — the celebrity — you’re still incredibly important to making the world work as it should, like it did that night 50 years ago.

PS You can see what I was watching that night at  https://apolloinrealtime.org/11/